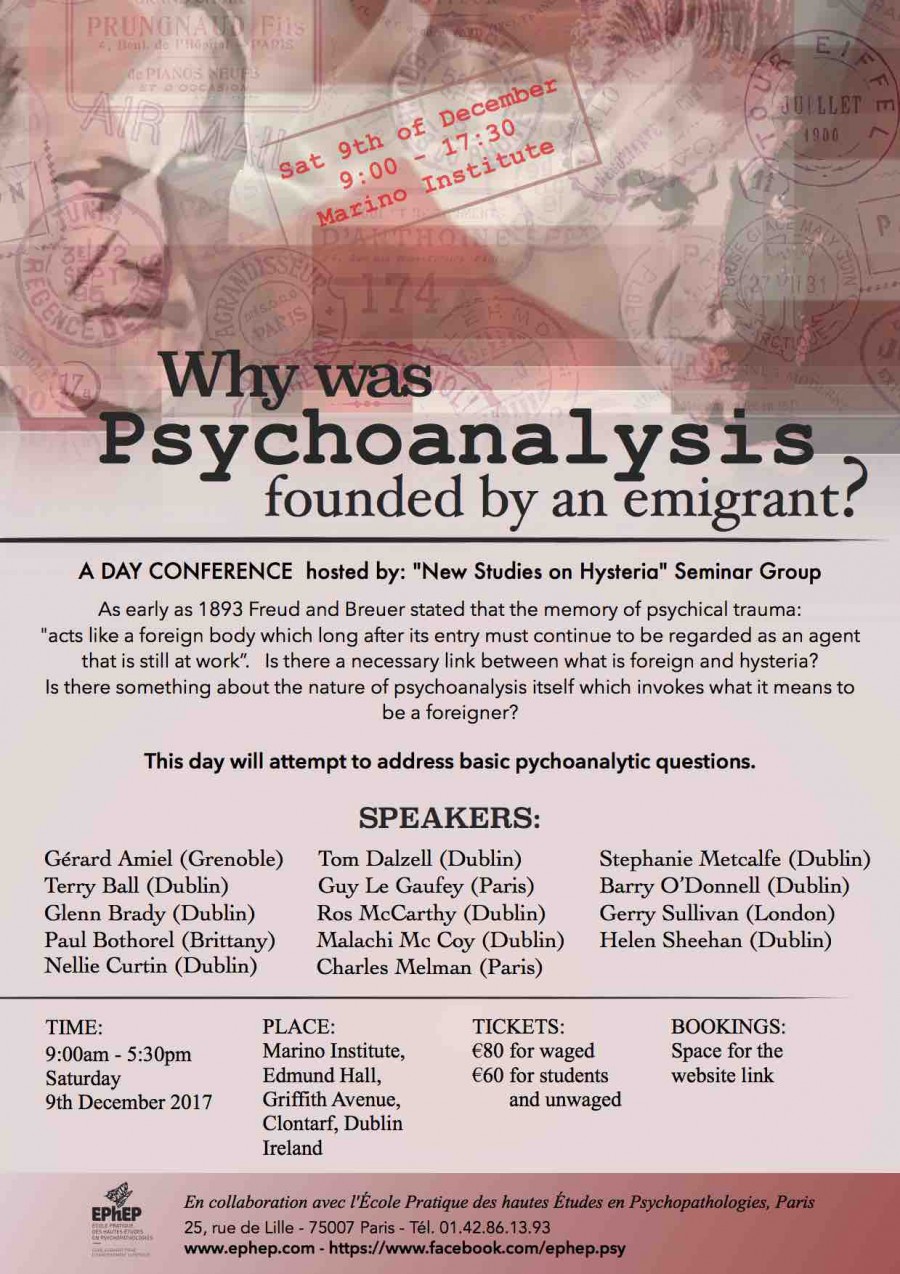 This Conference arises out of an ongoing seminar which translates and discusses Charles Melman's work 'New Studies on Hysteria'. This working group has been together for over two years. The group includes graduates of DBS, UCD and
Trinity College Dublin. Helen Sheehan is translating this work of Dr Melman.
This day Conference will address, as it's title suggests, a fundamental question for psychoanalysis: "Why was Psychoanalysis founded by an emigrant ?"
As early as 1893 the question of the 'foreign' was raised by Freud and Breuer in their Preliminary Communication in Studies on Hysteria. Referring to psychical trauma they write that its memory "acts like a foreign body which long after its entry must Continue to be regarded as an agent that is still at work". (p.6.S.E. 2)
Is there a necessary link between what is foreign and Hysteria ? Is there something about the nature of psychoanalysis itself which invokes what it means to be a
foreigner ? This day therefore will attempt to address basic psychoanalytic questions.

Paper Title : The matter of absence.

Gérard Amiel is Former President of L'Association Lacanienne Internationale Rhône-Alpes. He is Editor of Les Feuillets Psychanalytiques. He is a former Consultant Psychiatrist, former Medical Assistant at C.H.U. and head of the University Clinic. He is the author of numerous seminars, papers and a book to be published on 'Structure' in October 2018 by Érès.

Paper Title : Moving away from the Familiar

Glenn Brady is a graduate of the M.Phil in Psychoanalytic Studies, Trinity College Dublin. He has been a member of the 'New Studies on Hysteria' Seminar group, for over 2 years. He has also been a member of a study cartel of The Irish School of Lacanian Psychoanalysis (ISLP). He has worked in the area of disability care for 19 years. He is also a music teacher in the area of Intellectual disability.

Title : Freud's interest in the origins of Humanity as reflected in his theory of Psychoanalysis

Nellie Curtin is a Psychoanalytic Psychotherapist practicing in Dublin. She is a member of The Irish School of Lacanian Psychoanalysis (ISLP) She teaches in The School of Psychotherapy, St Vincent's University Hospital, Dublin.

Originally from Northern Ireland, Tom Dalzell is a psychoanalyst in Dublin. He is a member of L'Association Lacanienne Internationale and has written on psychoanalysis and theology.

Paper Title : Being a stranger to oneself.

Guy Le Gaufey was a member of the Ecole Freudienne de Paris  from 1974 to its dissolution in 1980. He then  co-founded the Lacanian review Littoral in 1981 and, in 1985 the Ecole Lacanienne de Psychoanalyse. He has written a great number of books (available at www. Le Gaufey. fr). He has published many books at épel (www. epel-edition.com), including Le Pastout de Lacan , translated into English by Cormac Gallagher at www.lacanianireland.com and available in print form in The Letter Irish Journal for Lacanian Psychoanalysis. He is also the translator from English to French on Gender Studies and the poetry of Philip Larkin.

Paper Title: "We see in the mechanism of Hysteria something which is a defence against dissatisfaction" (Melman -Seminar 8, New Studies On Hysteria)

Ros McCarthy is psychoanalyst, practising in Dublin and Kildare. She worked for over 40 years in the public and private sector as a social worker, with a special interest in parent-child discourse.

Malachi McCoy is a psychoanalyst and teaches psychoanalysis at the School of Psychotherapy, St. Vincent’s University Hospital, Dublin. He is a member of L’Association Lacanienne Internationale Rhône-Alpes, and co-ordinates a resource centre for people with severe diagnoses with Shine (formerly Schizophrenia Ireland).

Paper Title : Why was psychoanalysis founded by an emigrant?

Charles Melman is a leading psychoanalyst and psychiatrist in France. He is co- founder of the Association Lacanienne Internationale (ALI) Paris. Dr Melman has published extensively and contributed very influentially to the elaboration of Lacanian psychoanalysis internationally. He has been a strong support to psychoanalysis in Ireland over the decades. He worked with Jacques Lacan in Paris.

Paper Title : What did Freud allow the hysteric to teach him?

Stephanie is a Psychoanalytic Psychotherapist working in private practice in Dublin. She is a Registered Practitioner with APPI and is also a member of the ICP. Stephanie lectures on the MSc in psychoanalytic psychotherapy in St. Vincent’s University Hospital and has also facilitated modules on the Specific Modality Training course for students pursuing ongoing studies. She is a Clinical Supervisor on the MA in Dublin Business School and has published in 'The Letter' and on the EPHEP website. As well as psychoanalytic experience, she has also worked in the disability sector and in the area of mental health. She has been a member of the group ‘New Studies on Hysteria’ that have been working on translating works by Dr. Charles Melman since 2015.

Helen Sheehan is a psychoanalyst working in Dublin.

Gerry Sullivan is a member of the Centre for Freudian Analysis and Research London (C.F.A.R.)