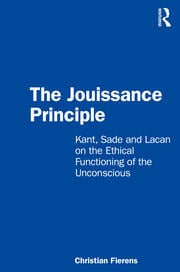 This book examines the concept of jouissance, a Lacanian term that refers to enjoyment experienced in different ways, from the enjoyment taken in an action that is ethically disapproved to the hidden pleasure taken by the patient in and from his symptom.

An intriguing discussion of the relationship between pleasure, ethics and rationality, The Jouissance Principle will interest scholars of psychoanalysis and European philosophy, as well as helping clinicians to find a practical and ethical pathway through their practice.

Christian Fierens is a psychoanalyst and psychiatrist based in Belgium. He holds a PhD on the question of psychosis in Freud’s work and has published several books on Freudian and Lacanian psychoanalysis, including The Soul of Narcissism (Routledge, 2019).